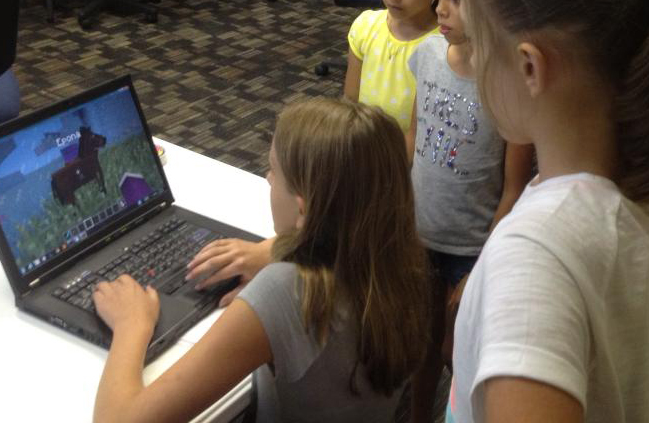 When I think back to 1998, I remember the awkwardness of transitioning into middle school. I remember my fresh braces, the mommy-cut bangs with OH-SO-MANY cowlicks, and an embarrassing amount of Savage Garden. (That chick-a-cherry cola song was my jam – but let’s not talk about that right now.) But the main thing I remember from 1998? Staying up late on school nights, trying to muffle the hissing of our AOL dial-up internet, so that I could surf HTMLgoodies.com and teach myself how to code.

It was a long, slow process. I didn’t know any other coders back then. I remember wondering:

Were there were any female web designers in the world?
Were there any other kids my own age who were into computer programming?
If so, were there any in my own state?
In the entire Midwest?
Would there ever be?

When Velocity Indiana announced they were looking for people to help launch coding classes for Kentucky and Indiana kids back in 2013, I was thrilled. There’s so much more potential to get kids interested in coding when you have a structured, supportive classroom environment. The Velocity Indiana classes not only allowed children to learn alongside their peers, siblings and friends; the classroom environments were also smaller and more intimate, with one-on-one mentoring from adults who actually write code for a living.

“There’s so much more potential to get kids interested in coding when you have a structured, supportive classroom environment.”

Even better? These classes were far from what most people think of when they picture typical coding classes. We weren’t sitting at computers and typing lines of code all day long. We were having fun while using the popular Minecraft video game as the backbone for introducing JavaScript programming to kids. Since so many children are already playing Minecraft, it provides a fun and familiar environment for them to learn — and they are encouraged to practice coding at home, not just during class.

From 2013 to 2014, I volunteered with Velocity’s Chris Hall and Mark Lorence for this exciting education project, which was unlike anything I’d seen in our area at that time (and would later spark similar camps in other parts of Kentucky, Indiana, and even an Ohio camp where I later provided guidance as a SME). My now husband, Rafael, and I helped Velocity craft the summer camp program, determine the network setup, and debug any technical issues. Mark reached out to Walter Higgins, the creator of ScriptCraft.js, and he agreed to be a resource for us if we ran into any questions (which, of course, we did). Meanwhile, I researched the best ways to facilitate a Minecraft modding class; wrote the curriculum; planned the classes; and taught Velocity’s very first Intro to JavaScript Through Minecraft coding class that April. Our first class included a small group of boys and girls aged 7 to 14 years, along with several parents who wanted to sit in on the class as well.

“Since so many children are already playing Minecraft, it provides a fun and familiar environment for them to learn – and they are encouraged to practice coding at home, not just during class.”

Reviews from our first class, which met every week for four weeks, were positive. Around that same time, the New York Times released an article titled “How to Get Girls Into Coding.” Naturally, this sparked some discussion among parents, educators, and web developers. Velocity Indiana soon began receiving requests from parents for an all-girls version of the class we had created.

“Some parents thought an all-girls class might be worth a try,” says Velocity’s Chris Hall.“We talked about it one day and we were like: ‘game-on!’ At the time, we didn’t know if there’d be demand but there definitely was! That was something we learned.”

“A lot of research has come out about girls getting into programming and coding because of female mentors,” Velocity’s Mark Lorence says. “That NY Times piece and the discussions that were raised around it were a catalyst [so] we wanted to see if girls were more likely to enroll.”

“At the time, we didn’t know if there’d be demand [for an all-girls coding class] but there definitely was! That was something we learned.”

“Demand” for an all-girls class is an understatement. When we launched an all-girls coding class in Jeffersonville, Indiana, just across the border from Kentucky’s largest city of Louisville, not only did the class completely fill up… but there was even a waiting list to get in! Being a female in tech myself, I jumped at the chance to come on board and teach the girls. Many people in the Kentuckiana community (men and women) personally thanked me for helping with this type of a class. A couple parents even reached out about enrolling their daughters in similar classes in Kentucky.

How does one go about designing a coding class for girls? Here is the process we used: Prior to the start of class, we all agreed that the all-girls class should teach the exact same curriculum as the coed class. Since I’d already taught a class previously, and had personally written the curriculum, I was even more familiar with the subject matter. This allowed me to condense the existing material, and cover more JavaScript commands that we’d run out of time to cover during our initial coed class. Additionally, we looked at what had worked well (and what hadn’t) for our coed class and proactively made improvements to the curriculum when we rewrote it for our all-girls class. For instance, I noticed some opportunities to improve the blended learning environment to make the instruction more accessible for various learning styles. This class incorporated more learning theory for all different types of learners.

What I couldn’t anticipate, of course, was how the students (and parents) would respond to the class. I had hoped to inspire the girls (who were between the ages of 7 and 13 at the time) to pursue STEAM (Science, Technology, Engineering, Art and Mathematics) careers, similar to how I had been inspired when I was around the same age as some of them. But I really had no idea what to expect. I suppose none of us did.

Throughout late July and early August, I teamed up with Izabela Bilanovic (aka The World’s Greatest Teaching Assistant) to introduce JavaScript to a class of bright young ladies of various ages and backgrounds. We met every Saturday for 4 to 6 weeks, and it was truly the best class any teacher could ever ask for.

The students were engaged, eager to learn, and this class had a sense of camaraderie like I’ve never seen before. Several girls mentioned how excited they were to be learning in an all-girls environment. They felt more comfortable and more engaged. Some students and parents requested that we all stay in touch after the class was over. Many of them were inspired and eager to participate in additional classes, including more advanced coding courses.

The most rewarding part of the whole experience was watching the girls learn and grow over the course of the month. By the last day, even the students who had been shy and nervous at first were readily volunteering to lead classroom demonstrations and to show off their work on the overhead screens. Students would high-five each other in celebration after correctly completing a line of code. Two different girls invited their best friends to join us on the last day, and one of them offered a pretty stellar sales pitch for the class: “They’ll teach you how to code, and you get to play Minecraft, and it’s all girls — no boys allowed!”

“The students were engaged, eager to learn, and this class had a sense of camaraderie like I’ve never seen before. Several girls mentioned how excited they were to be learning in an all-girls environment.”

Jessica Turk, whose daughter took the class, says, “My daughter loves Minecraft and was very eager to join a class of all girls doing what she eats, sleeps, and breathes. She likes to meet new people [and] this helped her open up to older girls and learn new things as well as share her experiences. [The class] helped her understand how to do [JavaScript] commands and we are going to start a server soon for her as well.”

One parent said, “Everyone has done an excellent job and we tell everyone about what you all have to offer.” Another parent said the all-girls class “was great and we hope there are more of them.”

Since the launch of our coding classes for boys and girls between 2013-2014, a lot has changed in the Kentucky and Indiana tech scene. Girl Develop It and iD Tech now have a presence in Louisville, along with some other fabulous groups, and organizations like Girls Who Code continue to grow in popularity. An hour south of Louisville, Awesome Inc in Lexington offers coding camps for children. I have had the immense pleasure of working with 3 or 4 of these groups and am very optimistic about the leadership in Kentucky’s coding classes in particular.

Meanwhile, I think it’s a safe bet that the movement to get more girls writing code will continue its momentum. It’s been extremely thrilling and rewarding helping launch this program and also getting to teach students at iD Tech, Awesome Inc, Winburn Middle School, and other institutions.

This is a cause that is very close to my heart, personally, and I’m so glad these classes are helping introduce other girls to potential STEM careers. These girls are my heroes and I’ve had so much fun teaching and mentoring them.

So yes, I’m thankful it’s not 1998 anymore. And I’m thankful for all the organizations out there who are striving to teach kids to code – and to change the ratio of diversity in tech.